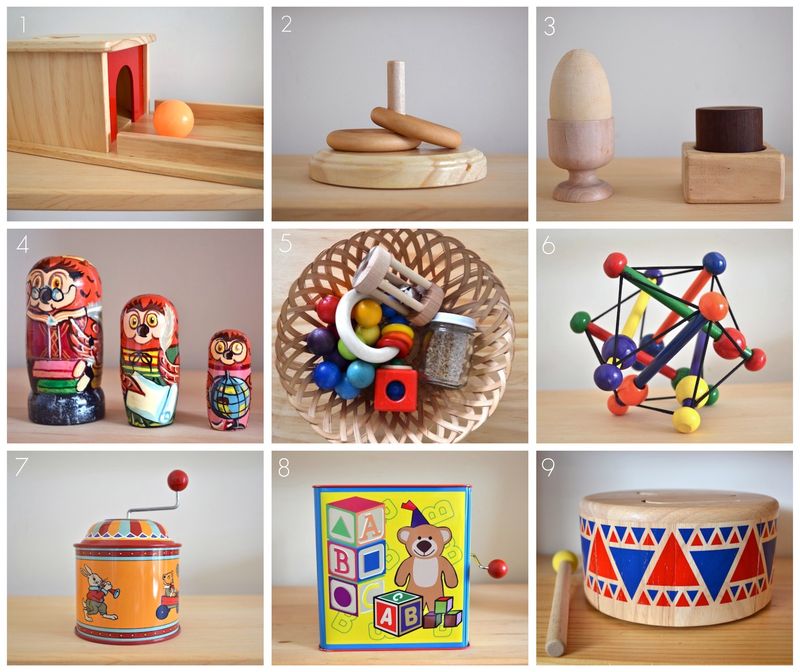 All of the materials on Ot's shelves at eight months. Some are new, some are old. Some are Montessori and others are simple traditional toys. He has materials on both shelving units in his room. His clothes and nappies are now stored in his wardrobe. He can reach his low shelves but his other shelving unit is out of reach, and will be until he starts pulling himself up.

3. Egg in Cup and Palmer Grasp Cylinder from At Home with Montessori.

4. Nesting Owls. These are much loved owls that belonged to Caspar. When I gave them to Otis I wasn't sure how he would react. Otis was immediately attracted to them. He loves opening them up to find another owl inside.

5. Basket of rattles and shakers.

6. I think this is called a Skwish.

8. Jack(Clown)-in-the-box. I had been looking for one of these for ages. Unfortunately most of those in our toy stores had commercial characters or branding. Luckily my Mum found this one just in time for Christmas.

He also has a basket of books, his walker with his Handmade Soft Blocks and this toy (below). I'm not sure what this is called, it belonged to Caspar also. Funny, Caspar never liked it but Otis uses it all the time. 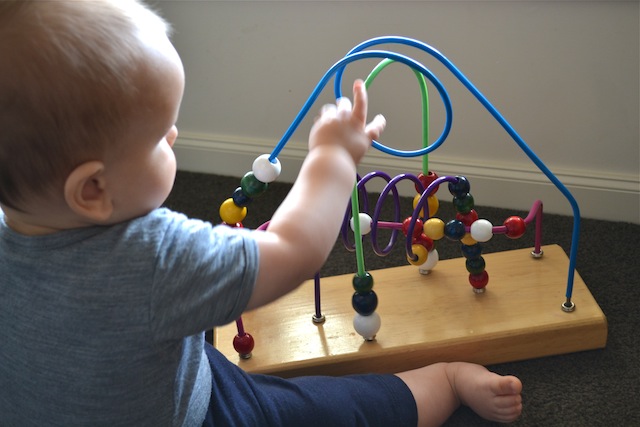 This is the clown inside the Jack-in-the-box. I wasn't sure about this one either, if the surprise would be too much, the clown too creepy. It turns out the surprise is kind-of fun. 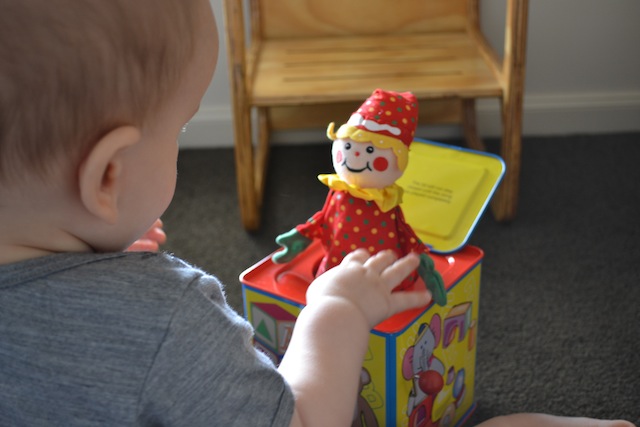 He also has other toys scattered throughout the house, his ball cylinder is permanently on the floor and there are a couple of other materials I want to show you in separate posts. In his room we rotate the toys gently. We keep his favourites out and those that are used less we rotate every couple of weeks. Otis appears to be a sitter and has taken to almost every material I have presented to him.

As an important note from birth we have shown Otis to put his toys away, back in the same place they came from when he has finished with them. If he is in his room by himself and gets out a few toys when we enter the room we will pack up those he is obviously finished with. It will be a while until he is able to put away his toys himself but I am sure he already knows where they go.

Also, does this seem like a lot of toys to you? On two shelving units this would be the maximum amount of toys I would have out. Soft toys? Yes, he has a few but currently only one out which he keeps on his bed.